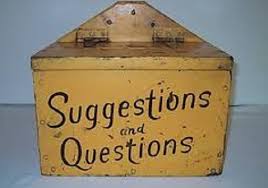 I thought long and hard about posting this, but having read and re-read what I’ve written several times, I don’t think it can be construed in any way as being critical of the club; at least I hope it can’t. It is my attempt at moving the discussions regarding communications between the club and supporters a step forward; no more, no less. Please read it in that light.

Let me begin by saying how much I’ve appreciated the thread started by Charlie Bravo on the messageboard entitled ‘CRFC’s Media Use, etc’ (Link to Messageboard) – his initial feedback from his conversation with the club and the subsequent responses from others make interesting reading. Cliff should be congratulated for his tenacity in following up something I know is important to him and to many others, and the club should also be praised for its response and for the efforts it is making to improve general levels of communication between itself and the supporters. Well done to both!

But here’s the rub…whilst it’s great that Cliff has managed to get such a welcome response, it has taken an inordinate amount of time and effort on his part to get this far. That he should feel it is unfair to name the person employed by the club to look into ways of developing the use of media and generally improve communication, or even give his/her title as it would be indiscreet, is an odd one.

I quite understand why Cliff has chosen not to, it is very honourable of him so to do, but I would have thought the club would want such an important post within the club to be widely publicised. Ok, you’d probably get a few moans early on, but thorough responses along the lines of the one Cliff has received would soon dispel any concerns. It is interesting that those who have responded have done so very positively; the feedback from the club is good and everyone is happy that things are moving forward and that there is a willingness from the club to listen to what is being said. That eases everyone’s mind. The problem is, we only learn this because one person is willing to go out of the way to contact the club. Several times.  It shouldn’t have to be that way…well, not by my reckoning, anyway.

SUGGESTION: It would make real sense to pursue this further, given that the momentum that is already there following Cliff’s aforementioned conversation.

In the same way there is a supporters’ forum at the start of season (and again mid-season, but I’m not sure if this is a timetabled event?) then why couldn’t the club, meet up every 4-6 weeks with a small group of supporters (following a request from the club via the messageboard), perhaps organised by the person Cliff spoke to last week. The brief would be to look at precisely the sorts of things that were mentioned over the phone and in the thread – focussing on media/communication with supporters, the website etc. The club could clearly show what is being done presently, what its hopes are for the next few months and what any long term plans might involve. The group could put forward additional thoughts/ideas from supporters following a thread on the board, with a designated person from among those present feeding back to everyone via the board following the meeting. The agenda could be controlled by the club if necessary, although it shouldn’t really need to come to that.

A meeting in the clubhouse over a drink or two and a sandwich midweek in the evening, four times a season…a chance for everyone involved to meet and chat.

‘Your city, your club’…it’s a great, great soundbite…really strong. But in order for it to be our city, there needs to be a bit more of our voice…?  Some of those on the messageboard, the likes of CB et al, are clearly passionate about Cov and genuinely want the best for everyone. As a soundboard for further improvements, you wouldn’t need to look much further than them.

In the last couple of years it seems to me that the club has got almost everything right so far. The era of Phil Maynard, Jon Sharp and more recently Scott Morgan is one of optimism and continued progress to clearly defined goals. Even the communication is better than it was (through the use of Twitter, the proposed newsletter, changes to the website and so on). I just think the club could share it’s news a little more effectively, that’s all. From what Cliff has said, this was acknowledged by the person he spoke to and it was so refreshing to hear someone say, ‘Hey, you know what, we might have got that one a bit wrong, but we’re listening and things are happening, it’s just that we want to take our time and get things right’.

Brilliant…but it shouldn’t really be Cliff who becomes the mouthpiece for the club.

Supporters are just that….supporters; by and large we are supportive. If we think we have a voice, a voice that is being listened to, then that’s all we ask. But because everyone has to act as individuals, via the messageboard, it’s not surprising that some of the postings come across as being negative. That’s the nature of tweets, texts, posts and so on. People express themselves in very different ways and with varying degrees of passion, but all have the club at heart. When you take away the body language and the non-verbal gestures, you’re left with text that is so easily misinterpreted (he says, smiling as he types) by the reader. Much easier to speak as a group and work together and avoid such pitfalls.

Maybe I’ve got it all wrong and I certainly don’t want to put this out on the messageboard because these are simply my thoughts, that’s all. If I am wide of the mark, then I unreservedly apologise in advance.

I know Tom Little quite rightly put an alternative viewpoint to mine following a previous post and I would have liked to have responded, but then the danger is it becomes a game of electronic ping pong with others chipping in, so apologies, Tom, for not getting back. I have much too much respect for Tom, JW and club to get embroiled in such an exchange over what is really just a suggestion on my part. This represents my thoughts to that and the ‘media’ question in general.

I hope no one sees this post as negative…least of all Cov. Ever since I started this blog back in July, I’ve tried to highlight all the positives that are going on throughout the club, both on and off the pitch. And there are so many.

And to finish on another positive, the club is absolutely right to say comparisons with Premiership clubs are unfair. They are on a completely different financial playing field and it doesn’t hurt us to be reminded of that, lest we get too carried away. Coventry have made huge strides on a limited budget. Monies just won’t stretch to cover everything on our wishlist.

Anyway, I’ve made a suggestion and I promise I shall not return to this subject for some time, unless responding to a comment. I’ve said my bit and feel better for it. No criticisms are intended of the club itself or anyone associated with it.